Here we describe a machine-learning method to differentiate between diffusive and DNA-bound proteins in single-molecule microscopy images. 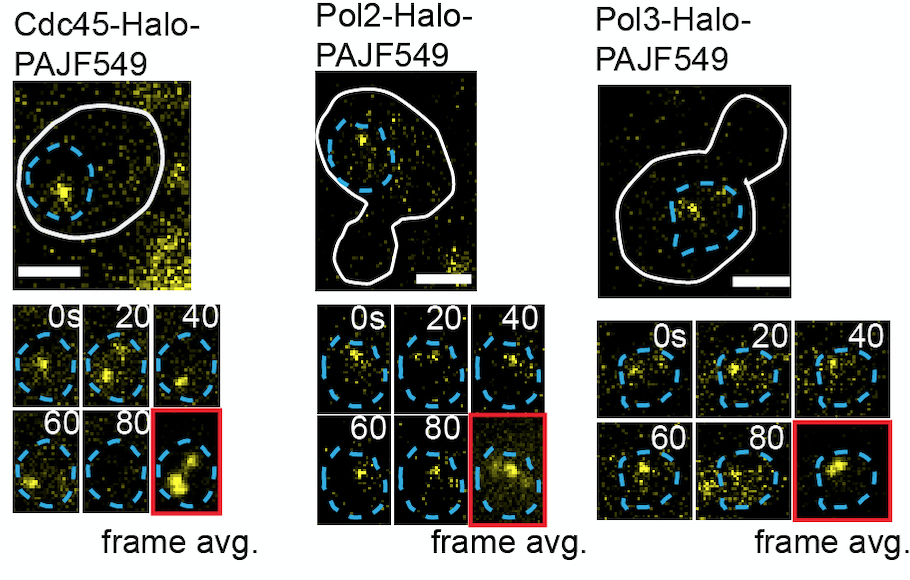 Inspired in our work with E. coli we asked if a dynamic composition in the replisome is a required trait in all species. To answer this we looked at the replisome of budding yeast, composed of proteins that do not share common ancestry with that of bacteria. We first developed a set of strategies to do single-molecule microscopy in this organism. Then we characterised the binding kinetics of different replisome subunits. Our results show that, in contrast to bacteria, the eukaryotic replisome is a much stable structure. This is particularly surprising in the case of the DNA polymerase at the lagging strand, which was though to bind much more dynamically to DNA. The paper leads to future work aimed to undestand what generates the differences between bacteria and eukaryotes, and on how the architecture of the eukaryotic replisome contributes to DNA replication

The figure shows single-copies of fluorescently labelled replisome subunits for three different proteins. The top image shows the whole yeast cell, the images below show only the nucleus at different timepoints.

The result of a nice collaboration with our colleagues from the Weber lab here in McGill.

The result of a nice collaboration with the Keck lab at the University of Wisconsin at Madison . 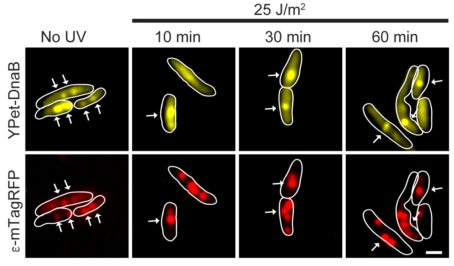 In this paper we found that in bacteria, the molecular machinery that copies DNA skips over the lesions caused by UV light to remain active. But that in addition, it responds to DNA damage by slowing down its rate of DNA synthesis about 5-fold. Limiting DNA synthesis immediately after damage may be a universal response to buy time for DNA repair.

The image shows how replisome subunits continue to be bound to the chromosome after UV treatment. The proofreading subunit of the Pol III was tagged with mTagRFP, and the DnaB helicase was tagged with YPet. The number of spots for DnaB decreases after treatment, and for Pol III the number increases. But despite of the difference in numbers, the proteins remain close to each other

In this paper we showed that most replisome subunits bind to the replisome for few seconds each time. Hence, DNA replication proceeds by synthesizing short fragments with lenghts of few kbp at the leading strand, after which the DNA polymerase unbinds and a new copy of it needs to be recruited to continue synthesis. The only stable subunit is the helicase, which can remain bound to DNA for tens of minutes.

In the image a single copy of the proofreading exonuclease of DNA Pol III binds and unbinds multiple times in the span of 1 minute.

In this paper we showed that plasmids accumulate at the poles as they get excluded from the nucleoid. However, they can travel accross the cell body from time to time.

In the image a plasmid can be observed traveling from midcell to one of the cell poles.

Here we studied the SMC-like complex, MukBEF, in live E. coli. Our single-molecule data showed that the active form is a dimer of complexes, we describe dynamic binding of these complexes and their dependency on ATPase activity.

The plot shows the relation between the stoichiometry of the different subunits, demonstrating a fixed ratio between their numbers

In this paper we showed that to the SMC-like of E. coli, MukBEF, does not require to work during the replication of the chromosome to shape it into the nucleoid.

In the image, a cell without one of the subunits of MukBEF (with another subunit labeled in green) induces the expression of the missing subunit. The relocalization of a loci close to the replication origin can be observed happening from the pole to the midcell, where it is usually found. 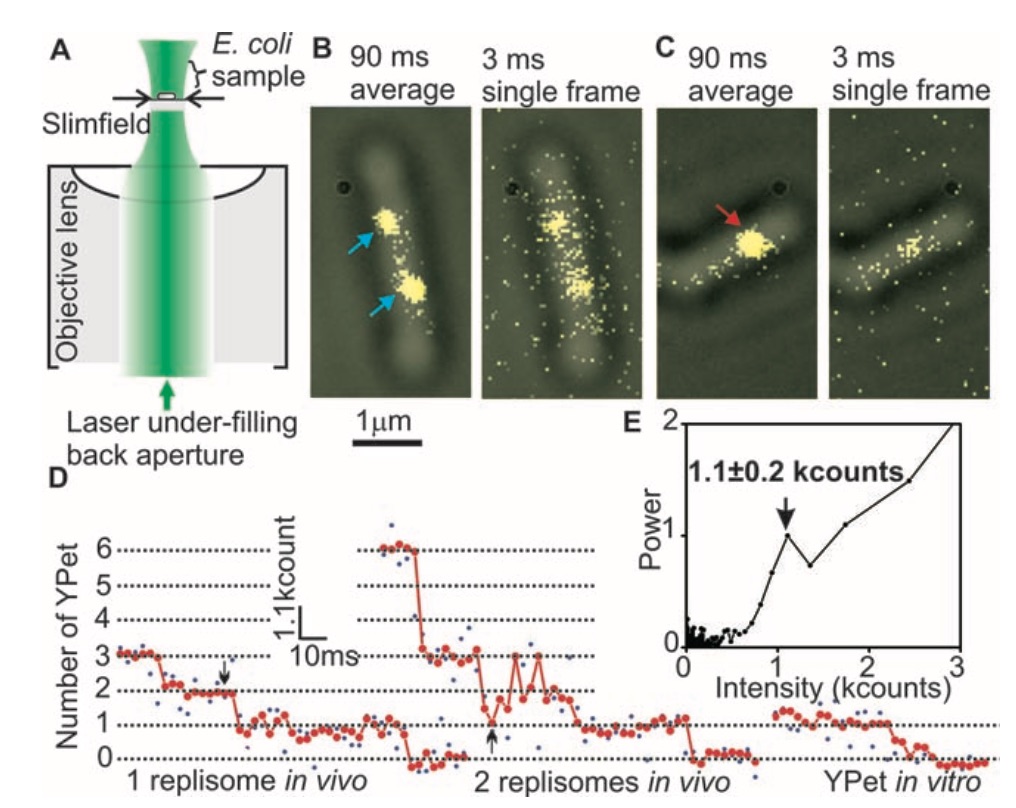 Here we determined the stoichiometry of the replisome subunits in live cells using single-molecule microscopy. Our data showed that there were on average 3 copies of the DNA Pol III at each replisome.

This figure shows the principles of the techniques used in the paper. A special illumination technique, named slimfield, allowed us to collect pictures of cells carrying fluorescent fusions of the replisome at millisecond rates, similar to the time necessary for the DNA Pol III to incorporate a nucleotide. We used a technique called stepwise photobleaching to count the number of fluorescent molecules at each of the replisomes (observed a spots).

In this publication we describe the localization of DNA replication in actively growing E. coli. We demonstrated that the DNA replication machinery, called the replisome, does not need to group with other copies of itself to work –a popular model at the time for both eukaryotes and prokarytes. Instead, we show that the replisome dynamically migrates in the cell during DNA replication, most of the time occupying a space away from its sister replisome (originated at the same replication origin).

The plots show the position of the replisome (green line) relative to the length of the cell over the cell cycle in a single cell. In addition, the position of two chromosomal loci, normally positioned at the poles of the nucleoid, is also shown.